A pub crawl and a vital lesson on choosing locations 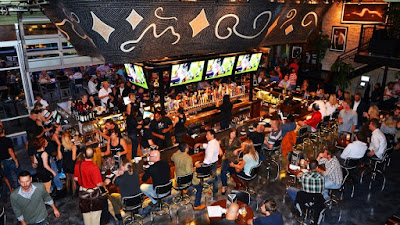 It was a Saturday night and I was out with friends for a few beers. I opted to go to Roadhouse in Bangalore’s swank Indiranagar. I really like this place, and not just for the great happy hours deals that it has. Roadhouse has a lovely atmosphere, all wood and guitars on the walls. The music is super, especially if you’re a fan of classic rock. The food is several notches above the pub grub you get in most places; there’s plenty of variety and it’s all very well executed. I’ve never had a complaint with the service. And, to top it all, it’s very sensibly priced.
Imagine, then, my dismay at finding just three tables occupied at 9 pm on a Saturday night. My friends wanted more of a buzz and so we headed off down the road. There’s Toit, where the crowds were spilling over onto the pavement. There was no chance of getting a foot in there. Further down, the relatively new Beer Café was also packed and we had to settle for sharing a table in the smoking zone.
I’ve been asking lots of people, especially those in the bar business, to explain this phenomenon: why a really good watering hole that’s doing everything right can’t attract a big enough crowd, while others manage to, seemingly without much effort. Location, they all said. It’s not that Roadhouse is in an out-of-the-way place. It’s right on 100 Feet Road, but on a third floor and the entrance is tucked away at te the side of the building.
Another restaurateur explained further. It’s about visibility or rather being in the line of vision of customers, he said. You walk past Toit or Beer Café, both opening right on to the main thoroughfare, and you can feel the buzz on the street. Naturally, it makes people want to go in and be part of the action, even if it means squeezing into an already crowded place.
In our book ‘Start Up Your Restaurant’ we’ve emphasized the need to be on the main street and to avoid anything other than ground floor locations. Apparently, it’s also great for business if any prospective customer walking or driving past can feel the vibe of the place spilling over, as I discovered on my most recent pub crawl.