GST rates for restaurants has been a hot topic over the last few months. The government is of the opinion that restaurants have not passed on GST benefits to customers and have used GST to increase their profits.

Here is a quick summary of who will gain and who will lose. Detailed analysis is provided below. 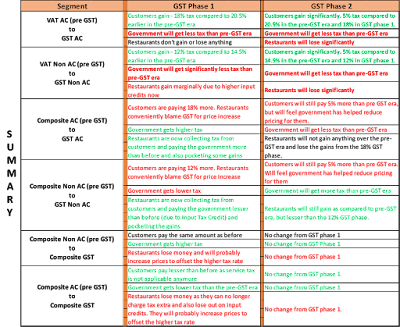 Taxation at restaurants prior to GST rollout:

Prior to GST, restaurants were subject to VAT and Service Tax and they were able to adopt a model of their choice.
1)      Composite VAT Model: Restaurants paid a fixed percentage of sales as VAT. The percentage varied by state and ranged between 2% to 4% in general. Restaurants opting for the composite VAT model were NOT allowed to charge this amount on the bill to customers. i.e. if a product price was Rs.100, the customer would pay only Rs.100. The restaurant would need to pay 4% of this amount (i.e. Rs.4) as VAT. No input credits were allowed in this model
2)      VAT Extra model: Restaurants could opt for this and charge customer 14.5% VAT extra on the bill. They could also claim input credit for all purchases where VAT was charged.
3)      Service Tax: For all AC restaurants, irrespective of which VAT model they were on, service tax was applicable. This was 6% of the bill value and could be charged extra. Input credit was also allowed for this. This was applicable only for dine-in and not for takeaway and delivery (though there was some confusion around this).

1)      Composite GST: All restaurants with annual turnover less than 75 lakhs could opt for the composite model (whether AC or non AC). GST was payable at 5% and this amount cannot be charged to customers on the bill. i.e. The model was similar to the composite VAT model above and effectively, the rate was pegged at a uniform 5% pan India.
2)      GST Extra model: In this model, restaurants could charge GST to customers on the bill. The percentage was 12% for non-AC restaurants and 18% for AC restaurants and was applicable uniformly across all sales channels – Dine-in, Takeaway and Delivery.

Here is where the confusion began:
1)      The government felt that restaurants were pocketing the gains from GST and were conveniently telling customers they need to pay extra (12%/18%) now because of GST and in some ways blaming the government for the price increase.
2)      The government was even more irked because the tax being collected by the government was now lesser than before.
3)      This “Customer pays more, Government gets less and the restaurants gain” situation did not sit well with the government prompting them to make changes and perhaps teach the restaurant industry a lesson.
4)      Unfortunately, point 1 above was true only for restaurants moving from a composite model to the GST model. This segment comprised primarily of value for money local restaurants and some QSR chains – we can assume that both of these put together would constitute over 80% of the industry. It would not be wrong to state that this segment did conveniently use GST as an excuse to charge customers more and pocket the gains. The alternate view on this is that these restaurants held off on raising prices this year (annual price increases are normally in the 5-10% range) because of GST

What the Government did?
1)      In a reactive mode, the government made a decision to lower the GST to 5% across all restaurants and disallow input credit.
2)     This change is more a populist move to appease the larger population that the government has taken steps to lower expenses for them. By increasing taxes to 12%/18% initially and lowering it to 5% now, it will seem that the government is helping the common man. The common man will still be shelling out 5% more than the pre-GST era for their regular dosas, rotis and meals.
3)      The folks most impacted by this move to disallow input credit are the professional restaurant chains who were on the VAT extra model (14.5% VAT chargeable extra to customers in their bills) and the ones who pay their taxes honestly. Now these restaurants would be able to charge only 5% extra to customers and not get input credit. They will have no choice but to increase prices by about 10% to offset the losses and maintain their net margins.

My previous post analyses the decision and long term impact for the industry.

I have provided below the various scenarios for restaurants in the pre-GST era, in GST phase 1 and now in GST phase 2. 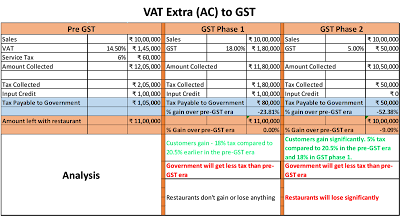 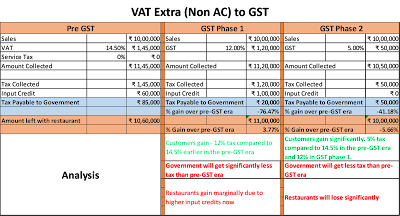 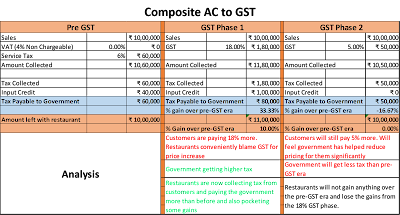 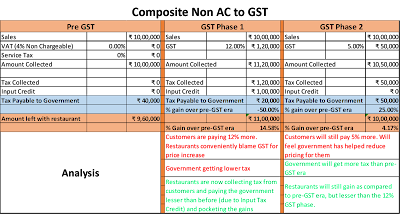 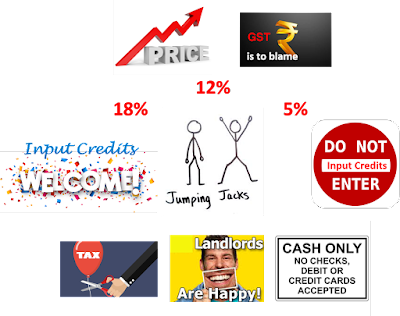 GST rates for restaurants has been a hot topic over the last few months. The government is of the opinion that restaurants have not passed on GST benefits to customers and have used GST to increase their profits. From the government's perspective they are correct. Restaurants (those who were earlier in the composite model - 80%+ of the industry I guess) have used GST as a way to charge customers more and have conveniently blamed the government for it. The alternate view on this is that most restaurants were waiting for GST before revising prices (which most restaurants do annually by about 5-10%) and have simply held off on raising prices because of the GST rollout. Thus in some ways by not increasing prices, the benefits have been passed on to the customers. In my opinion the real issue that irked the government was the fact that the restaurant industry by and large communicated to customers that the price increase is because of GST and they could do nothing about it.

But the government's reaction to the situation is not something I agree with. Rolling back input credits is a reactionary populist move and is a big backward step, especially for this already cash heavy industry. By removing input credits, the government has shown immaturity and a poor understanding of the ground realities in the industry. The decision has been made without assessing the long-term implications. Or maybe the government wants things to function as before thus allowing a cash economy to thrive. Restaurants won’t complain, suppliers won’t complain, landlords won’t complain and now the consumers will also applaud the government that they have lowered costs for them (though they will actually be paying 5% more now than the pre-GST era).

The decision creates a bigger problem in my opinion allowing the industry to once again gravitate towards cash collections and payments. Restaurants can show lesser sales and pay lower GST, pay off suppliers and landlords in cash without bills thus lowering costs. Landlords and suppliers are happy to do this as they don’t need to pay GST or can pay lower GST. This also lowers their income tax pay-outs as they can show lesser income now. Landlords, suppliers and restaurateurs can play with cash again like before - Their good days are back. The government has in some ways just given them a 5% bonus to play with.

The GST rollout was a great opportunity for the government to push the fragmented restaurant industry and the supporting eco-system to move away from cash transactions, become more professional, tax compliant and gravitate towards digital payments.

To put this in context it is important to understand the key taxation related issue in the restaurant industry and the supporting eco-system:

There are 4 big motivations for the restaurant industry to siphon off cash collections from sales:
1) Lower input costs: Suppliers are more than happy to offer products for cash (with no tax). For small suppliers, cash is a more convenient way of doing business and they don't need to bother about tax filings. It is also a way for them to compete better with larger/professional suppliers, who charge taxes.
2) Rental Payments: The biggest incentive to deal in cash is for landlords and they are very happy to take a large portion of their rental payments in cash. Cash payments are also a great way for them to reduce income taxes. They can also ask the restaurateurs to shell out more rent in lieu of the GST not charged to them (e.g. 18% GST gain split between the landlord and the restaurateur).
3) Staff Salaries: If restaurants officially employ more than 10 people, they need to register for ESI and when the number crosses 20, PF becomes mandatory. They also need to pay annual statutory bonus, leave wages and double salary for working on holidays (NFH - National Festivals & Holidays). Both ESI & PF, involve deductions from employee salaries and all of the above implies higher costs for the restaurateur. The largely migrant restaurant staff population does not value long term benefits nor are they keen on going to a ESI hospital. What matters to them largely is cash in hand. Having cash available to do this means restaurateurs can pay their staff more and avoid PF/ESI registration & the related expenses and compliance requirements.
4) Paying lower GST and income taxes - Direct benefit of reporting lower sales. I believe this is not a primary motivator for restaurateurs and is simply an added benefit that comes with the solution to address the above 3 issues.

Issue number 3 above (Staff salaries) is not something GST could have directly addressed. But GST could have truly helped with issue 1, 2 & indirectly 4.

Allowing input credits may not altogether solve the problem of lower sales reporting by restaurants, but would have atleast pushed them to ask for proper bills from landlords and suppliers in order to avail input credit, thus addressing issue 1 & 2 above. Rental collections by landlords through banking channels would have a significant positive impact on GST collections as well as on income tax collections. Smaller suppliers would also slowly gravitate towards digital payments and proper tax payments. Because of the above, the restaurateur’s motivation to siphon off cash would reduce and this will mean higher GST and income tax collections for the government.

The government should have stayed with the GST framework, kept the GST rate at 12% for all restaurants (or stayed the course with 18%/12% rates as earlier) and allowed them to avail input credit. This would have ensured better collections and also helped clean up the supporting eco-system. Businesses would have been encouraged to move away from cash payments and gravitate more towards digital payments, deal with vendors who are professional and pay taxes honestly and also force landlords to show the real rentals they charge, pay GST & income taxes as per the rules. The GST regime with input tax credits would have slowly pushed the industry and the supporting eco-system towards becoming professional and paying taxes honestly. This would not have been a populist move though, but the long-term benefits would have been very impactful. As for consumers paying more, the government should have let market forces play their part. Why is the government trying to regulate whether a customer should pay Rs. 20.50 or Rs.22.40 for an Idly? Food is an essential need, eating out is not.
Posted by Jayanth at 10:55 PM 70 comments: